As part of this year’s Apple Blossom celebrations the annual visit with festival’s queen and royal princesses took place at the West Hants Community War Memorial Center in Windsor NS.

This year’s 84th Queen was Princess Hantsport, Eleanor Gallant. She was accompanied by community princesses including 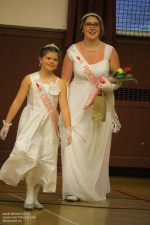 The official coronation of the 84th Queen Annapolisa was held Friday evening at Acadia’s University Hall in Wolfville. The weekend was host to numerous events including the annual parade, concerts and family activities. The agricultural festival and celebration has been held annually in Nova Scotia’s  Annapolis Valley since its inception in 1933.